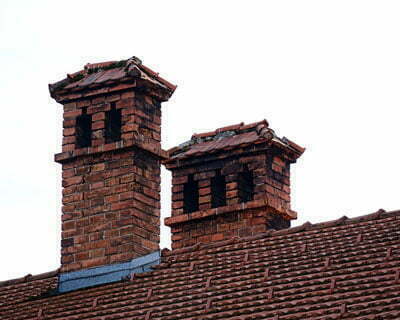 There are general signs that chimney repair might be needed before the homeowner has an inspection done. These can include the following.

Problems Starting a Fire – If the homeowner has trouble starting a fire or keeping it burning, it could be due to poor airflow or a blockage.

Strong Odor – Strong, unpleasant odors often happen because the updraft system isn’t working properly and can be a sign of carbon monoxide getting into the home.

Damaged Damper – If the fireplace damper is difficult to open or close, it needs to be repaired immediately as waiting will lead to further issues.

Animals in the Chimney – It is possible that birds and other animals will get into the chimney and cause a Chimney Blockage or other issues. Homeowners who can hear any animal noises in the walls near their chimney should have the chimney inspected immediately. A common concern for homeowners is a bird’s nest on the chimney, but other animals like raccoons or squirrels can enter the chimney from the roof in search of a home. Any time animals are detected or suspected in the chimney, a professional should be called for Animal Removal. This will minimize the potential damage the animal can do and help ensure any blockages from the animal can be cleared away before the fireplace is used.

Preventing a Fire and Other Issues

The biggest safety concern for a chimney is the potential for a fire. Fires can start in the chimney, then get into the walls of the home and quickly destroy the home’s structure. These fires often spread incredibly quickly because they’re inside the home, leading to a huge risk for the occupants.

If you want or need your chimney services, rely on us to take care of you. We have a team of the best and most qualified professionals working with us. If you want efficient services at affordable prices then rely on us. When you have turned to other services but were not convinced of their ability to offer you the quality of services that you need then it’s time that you turn to us. We are the most reputable and reliable chimney sweep in the Wilmington Delaware area, offering superior chimney services to those who rely on us. You’ll also receive our service guarantee.